Nostalgia Laced Ruminations with Dinosaurs, Sleestak's, and More: Hilobrow Re-Posting on Land of the Lost, the Original Series

Land of the Lost: Nostalgia-Laced Ruminations with Dinosaurs, Sleestak's, and More:

Hilobrow Re-Posting on Land of the Lost, the Original Series 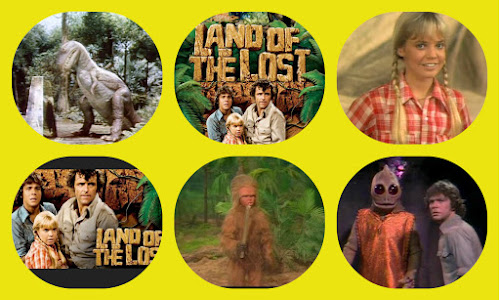 Or am I, like Will, Holly, and Rick (Alice? Gilligan? Neo?) trapped in a world beyond time, space, and knowledge?

I am, of course, sitting in front of a TV set, at the fine age of 13, and I am watching mesmerized — really, I can’t move — watching Sid and Marty Krofft’s epic Land of the Lost.

The Krofft brothers are responsible for H.R. Pufnstuf (fame), Sigmund and the Sea Monsters (ignominy), and The Bugaloos (infamy). But it is Land of the Lost that paralyzes me and my sister Josie, out in the borderlands of Laredo, Texas.

Cute as a button (but grrl-feisty) Holly, young stud Will, and their strapping dad Rick Marshall (who will be unceremoniously dropped from the show Season 3 for asking for too much residual filthy lucre), are trapped in a bizarre world with three moons, populated with dinosaurs, furry pre-humans, sentient lizard spacemen and mucho más. Who needed marijuana or peyote in South Texas, when Krofft-fare filled the airwaves (this one ghost-penned by David “Trouble with Tribbles” Gerrold, Ben Bova, Theodore Sturgeon, Larry Niven, and Norman Spinrad)? 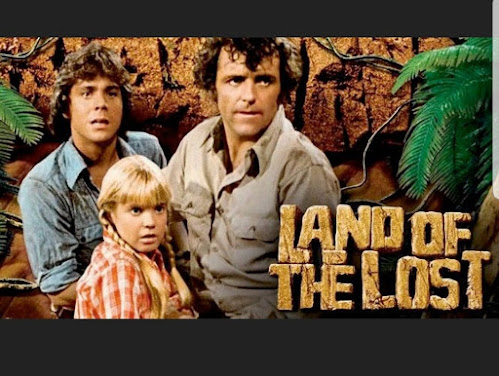 The premise of the show was genius. Trapped in another world, the Marshall family must learn the secrets of this bizarre space; think Stranger in a Strange Land, but with YA-savvy. Time and again the bizarre family unit, sans Mom (who would ruin all the fun?), would be thrust into impossible situations: flying pylons in the sky spouting semaphores, hairy man boys aping Caliban (Cha-Ka with Holly) with Rick left to play a tepid Prospero.

No doubt my urgent hetero pinings fueled the uncanny draw the show had for me, but I think many in my generation were equally touched by this ambitious show that somehow (especially the first season) found a way to transcend all the Saturday morning rancid schlock it was up against.

No, this was not Ibsen for minors, but like Star Wars and Close Encounters of the Third Kind, it found a way to convey notions of the cosmic to kids who had no idea they were waiting for Godot, with groovy stop-action dinosaurs and sets that look like castoffs from Star Trek.  Ah, to be 13 again. But in a way, I never left. Unlike lucky Rick, kicked off the show and replaced by his brother, I am somehow still there.

Posted by William A. Nericcio at 7:17 PM